A vocal processor affects the vocal signal in varying ways: delay, reverb, distortion, pitch correction, and more. I’ll discuss the main types of processors in detail later, but essentially, they’re a crucial tool for any vocalist who wants to add extra color into their voice, wants professional-sounding vocals, and/or wants to experiment with interesting vocal sounds.

For the uninitiated, I’ll detail the main types of vocal processors/pedals below. 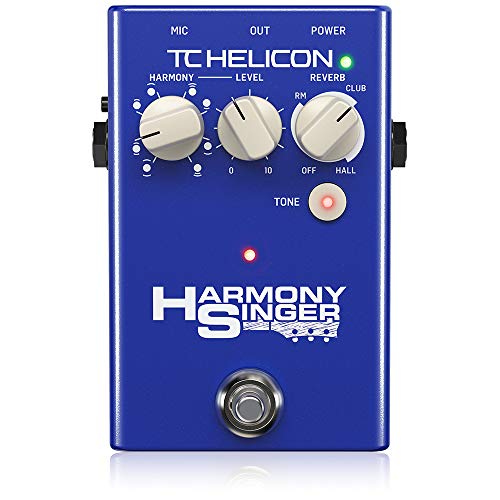 Perhaps the most sought after effect within the realms of vocal processing units, a vocal harmonizer does exactly what it says on the tin—it replicates another vocalist singing a harmony alongside your voice.

If you don’t have backing singers then a vocal harmonizer replicates them for you. The range of harmonies you get depends on the respective unit. The high-end pedals can provide more than one voice added to yours and offer a wider range of intervals and malleability over the harmonized voices.

Although it’s better to have knowledge of the key you’re singing in so that the harmonies are perfectly synchronized to your voice, many vocal harmonizers do the heavy-lifting for you so you can focus on singing rather than manually dialing in the key you’re in on the unit. 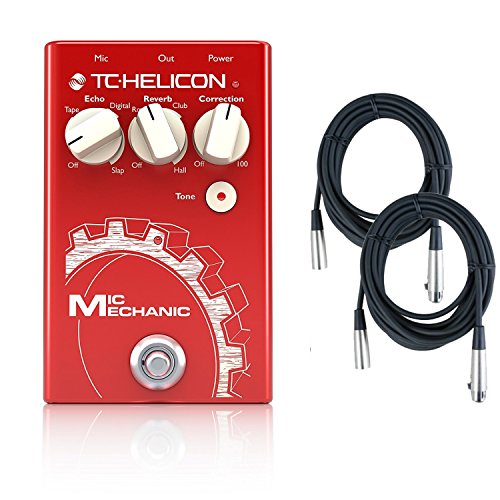 Despite being everyone’s favorite go-to pet hate, pitch correction and autotune isn’t exactly the same thing. Pitch correction is slightly more meticulous in that it allows you to hone in on specific notes that are slightly flat or sharp and fix them, whereas autotune is more of a catchall way to keep the notes in key but in a much more imprecise way.

Autotune can sound robotic because you’re not specifically setting what notes you want to hit—it’s more generalized. Pitch correction sounds more natural because you’re dialing in specific scales and keys rather than shooting for the moon.

That being said, most pitch correction and autotune pedals do a bit of both. Autotune pedals aren’t just for the pretend vocalists so put your pitchforks down! You can get some really interesting sounds out of them if you play around with the settings. More often than not, you can set how quickly the pitch is corrected. Fast correction means an artificial sound that countless rappers use today and slow correction is a little more organic.

Nobody is perfect. For the vocalist who doesn’t always hit every note all the time or wants to play around with robotic vocal sounds, these pedals are looking at you.

In recent years looper pedals have become a key ingredient for the solo singer/songwriters who want to have multiple vocal phrases sang at the same time whilst singing over the top of them.

They allow you to record a vocal section that is then repeated in the background for as long as you want.

They’re a great way to build up melodies whilst still retaining your lead vocal over the top—you essentially become your own backing band!

The main thing to consider with a looper pedal is how long do want to record the loop. From thirty seconds to thirty minutes, looper pedals offer different amounts of available recording time. If the section you’re recording is particularly long, make sure the looper pedal will compensate for it. 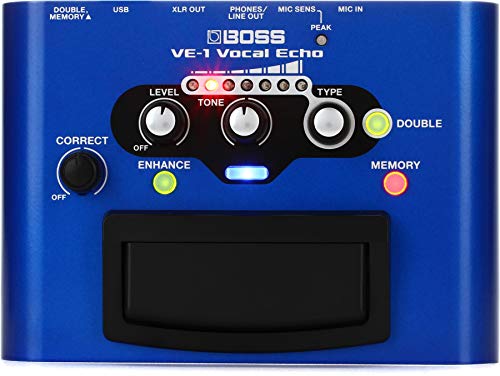 A staple for any vocalist, vocal reverb artificially recreates the sound of a voice hitting a specific space.

Reverb is what happens when sound bounces off objects and surfaces in a room. Shout in a big hall and you’ll be hearing your voice bouncing or reverberating around the room. It happens so quickly that you can’t actually hear the original source being delayed (we’ll get to delay later.) The sound you hear is reverb. Regardless of what it does, reverb is crucial for adding texture and life to your voice.

Reverb comes in all shapes and sizes… literally. Because reverb is recreating sound bouncing around a room, the size of that room is usually customizable on any good reverb unit. The larger the room the more reverb.

Reverb eventually decays. The time it takes for the reverb to decay is called the “tail.” In a big hall, the tail lasts a long time, but with plate and spring reverb the tail is quick and therefore it decays quickly thus creating a specific sound. You don’t really need to know your different types of reverb to get a good sound for your vocals.

Reverb is a naturally occurring phenomenon so you’ll most likely already know what reverb is without necessarily knowing what reverb is. All you need to know is that reverb adds space to your vocals, so they sound much bigger than they actually are.

Why should guitarists have all the fun? Distortion can add some unique flavor to your vocals or a hint can add some nice grit or dirt to your voice. A good quality distortion pedal will cater for a range of levels of distortion via a drive knob. The more drive the more distortion… simple!

Because the sound can get muddy, again, any processor worth its salt will allow for control over the tone of the distortion so you can generate an array of distorted tones.

One thing to know is that because distortion pedals are boosting your signal, feedback can always be lurking around the corner. In a live situation, this is something you certainly don’t want; either cater to the possibility of feedback by attenuating volume or look for a pedal that keeps feedback to a minimum. 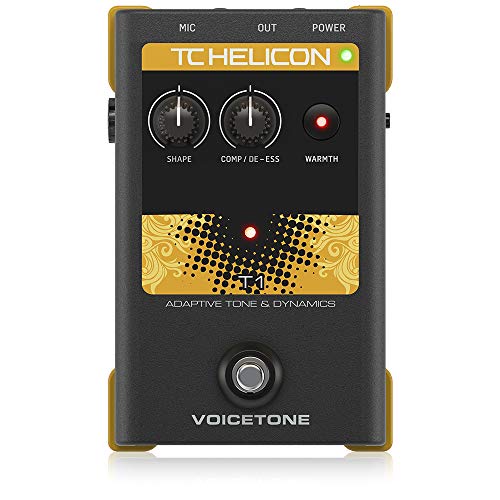 Compression is more of a tool rather than a plaything, but if used right, it’s an indispensable tool that can transform amateur sounding vocals into professional-sounding vocals.

Compression reduces the dynamic range between quiet and loud signals. More often than not, any signal be it guitar, bass or vocals has loud and quiet parts within a song. Because of the volume changes you want the signal to be balanced throughout.

Compressors reduce the volume differences and keep the signal consistent. If your voice drops to a whisper and then you have a loud section in a song, you might have only catered for the loud section; therefore, the quiet parts will be relatively inaudible. A compressor ensures that the range is tight so that everything can be heard.

Compression is not the easiest tool to get the hang of. Compression pedals are aimed at the experienced craftspeople. There’s a subtlety to compression—a little bit goes a long way. Don’t be deterred though by the endless amounts of would-be producers online. Yes, there are guidelines when using compression pedals, but with a bit of time and experimentation, you’ll get the hang of them eventually.

Earlier I discussed reverb and how the sound bounces around the room so quickly that you cannot hear the original source actually being repeated, well, with the delay you can hear the source being repeated. Sound fun? They most certainly are!

Digital delay pedals are similar to analog, but you have more control over how long the delay will occur and the signal is an exact repetition of the source signal, unlike analog whereby the signal gets warmer as it repeats. The argument between digital over analog is akin to Pepsi or Coca-Cola—there’s no logical answer it is entirely dependent on personal taste.

It goes without saying that there’s a huge amount of room for experimentation here. A fast delay that decays quickly will add some texture to your vocals, whereas long delays with lots of feedback create ethereal soundscapes. I don’t think there’s a psychedelic band in existence that doesn’t or hasn’t utilized delay in the latter way at some point. 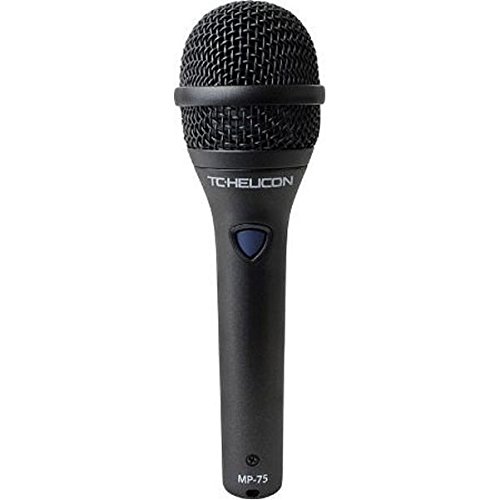 All the “autotune microphone” is doing is turning on or off the autotune effect. The pedal still has to be tinkered with first to set the relevant key, but rather than pressing a foot-pedal to turn it on, you can simply turn it on via the microphone. For irascible performers, this is particularly handy because if there’s a point in a song where you need a little autotune but you are way out next to the audience, by a flick of a switch on the microphone you can turn the effect on without going back to the pedal.

For the most part, autotune microphones work with a specific autotune pedal, not every pedal will work with them, so that’s certainly something to be aware of.

What is a vocal processor and what does it do?

Vocals aren’t a perfect medium. Dry vocals without any kind of processing, oftentimes sound a little uninspiring and dull. You could be the greatest vocalist in the world and yet still find your vocals sounding lifeless.

Granted, acoustic vocals can sound great, but even the most basic of vocal processing like a reverb can add that extra flair to any vocals. It’s not just about adding a little flair too; vocal processors can go beyond the limitations of the human voice by adding effects that simply can’t be organically replicated. Think of them like guitar effects pedals for your voice.

In a live setting, you’ll seldom see any “soundguy” not using some kind of vocal processing for the dry vocals. They’ll at least add reverb or delay and EQ them, but why should they have all the fun? Vocal processors put you in charge of how you want your vocals to sound!

If you only need a looper then a vocal processor that does everything and then some is a waste of your hard-earned cash. As with the majority of musical equipment, generally, the more you pay the more you get—vocal processors aren’t an exception to the rule. For example, the Boss VE-500 covers most of the conventional effects, but it will set you back a lot more than say the TC Helicon VoiceTone T1 that simply allows you to control the basic sound of your vocals without any bells and whistles. The key is to know what you want.

There’s no shortage of capabilities, so be aware of exactly what you want to get out of a respective vocal processor—they don’t all do exactly the same thing.. As always, you should read reviews about any product you’re looking to buy. Is it sturdy for a live situation? How well does it perform? Fortunately, there are extensive reviews of vocal processors online, so make sure you read them before you purchase a unit to ensure that you will be getting a high-quality product for your money.