PreSonus has built a solid reputation for manufacturing high quality, but reasonably priced audio interfaces. One of them is the PreSonus AudioBox USB 96 which we will be taking a look at in this review. It is a standout in the market for 2-channel audio interfaces because of its affordable price and amazing features. Getting started with it is as easy as 1-2-3 since all you have to do is plug it into any USB 2.0 or greater port, and you’ll be good to go.

Aspiring recording artists and first-time audio engineers will love the AudioBox USB 96 because it has enough to give them what they need to get started and all for a reasonable price tag.

One of the first things you’ll notice about this audio interface is its size. It is smaller than most of the other audio interfaces available in the market, and whether this is a good thing or not depends on the user’s personal preference.

Like most PreSonus interfaces the AudioBox 96 still features the same silver and blue aesthetic that most PreSonus users have become familiar with, and quite frankly it looks really nice.

The Studio Mac Plugin Suite is included with the AudioBox 96. It comes loaded with several useful instruments and plugins.

What makes this even better is the inclusion of products from respected names like iZotope and Lexicon.

This gives you high-quality content right from the get-go, so it’s best you avoid rushing to use your AudioBox 96 because you may end up missing out on some amazing goodies along the way. 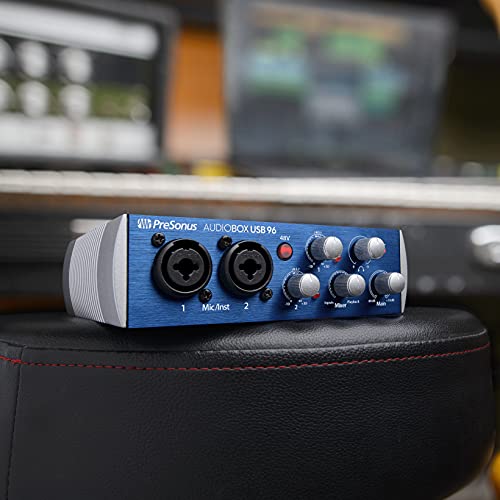 On the front of the device are two XLR/TRS inputs that also feature a 48-volt switch designed for phantom power. In addition to these, there are also gain controls for every input, control for the main volume, and control for headset volume.

There is also mixer knob control that lets you control the amount of sound you get to hear from the AudioBox’s inputs in comparison to what you hear from the playback on your computer.

The back of the AudioBox is where you’ll see some more ports. Ports that can be found in the back include the main outputs, the headphones port, the MIDI ins and outs, and lastly the USB 2.0 port which is utilized for powering the device and transferring data.

As far as the design goes it looks pretty well built and solid. The silver and blue aesthetic give it a certain swag. Also, do not be fooled by its size because even though it’s small, it can take a bit of abuse and still record like nothing ever happened to it.

Now, let us get to the meat of the subject which is the sound quality. How exactly does the AudioBox 96 fare when it comes to audio quality? Well, we’re glad to say that despite its size this bad boy can produce some high-quality tunes.

Even though there might not be that many inputs and outputs, the device is relatively powerful as far as sound quality is concerned. Its preamps can be used to record just about anything from vocals all the way to drum beats.

The audio interface is capable of handling up to 96kHz of sample rates while its bit depth is capped at 24 bits. Sound wizards who want something higher should probably look elsewhere, but for most people, especially beginners, 24 bits is already more than enough.

All in all, the PreSonus AudioBox 96 would make a fine interface collection to any audio engineer’s or musician’s lineup.