The Steinberg brand is more known for its software, but it has also dabbled in the hardware market and they are just as impressive. The UR242 is one of the top 4-channel audio interfaces that you can get for a reasonable price. Don’t be fooled by its affordable price tag though because the UR242 is a beast in its own right.

This audio interface packs a mean wallop in a market that constantly longs for nothing but excellence. It has the perfect combination of high-quality hardware and topnotch software and coming from a brand that is mostly known for producing software that is quite impressive.

Okay, so it looks decent enough for the most part, but what about its features? How do they hold up to the rest of the competition? Steinberg took the liberty of incorporating four simultaneous input channels.

Two of these channels are Yamaha PRE Class-A mic preamps, both of which are efficient and excellent. The other two inputs are TRS and XLR are line-level sources meant for instrumental and microphone connectivity. Both of these inputs can handle high impedance signals without any problems whatsoever.

Being a Steinberg product, it wouldn’t be complete if it didn’t come with the brand’s solid software included. The UR242 includes standard copies of Cubasis LE and Cubase AI.

As one would expect this device is plug and play compatible with Cubase AI, but also plays well with other digital audio workstations. 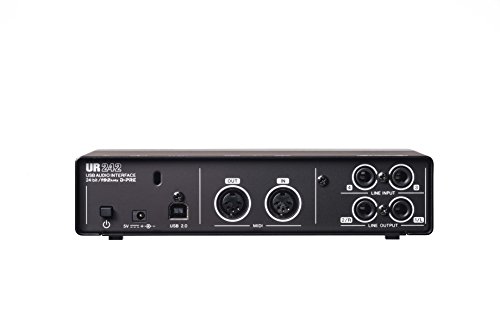 Each input comes with pads and its own gain knob and gives users the option of using phantom power for their condenser mics. The other controls on the front are in the form of a headphone and master level knob, while the back is where you will find two MIDI parts along with two quad TRS clusters with two outputs and inputs. Steinberg has also included a USB 2.0 port and DC adapter port to provide you with flexible options depending on how you’re utilizing the UR242.

Once you begin recording on the Steinberg UR242, you may find yourself impressed with its impeccable sound quality. The sampling rate clocks at 192Hz and is simply a pleasure to work with. It delivers pure sounding tones while its ability to work with hot signals is an indication that the user won’t have to worry about any problems even if you’re using some of the most aggressive guitar pickups.

The mic preamps also do a fantastic job of making any condenser sound more natural all while not adding any coloration to its tone. Overall, the Steinberg UR242 is a formidable device that can hold its own against the competition. It can give you great quality for a budget price.